Recently we came across these two Civil War-era letters among our many documents that are in the process of being cataloged and digitized at the Davis Library. This correspondence is between an insurance agent in New York, Henry Henig, and the Secretary of State at time, the Honorable William H. Seward, in Washington D.C. regarding insuring property held in seceded states.

The first letter, dated September 19, 1861 is shown below with a transcription. In the top right corner of the letter is the word “Copy” indicating that this is a copy of his own letter to the Secretary of State that Henry Henig hand wrote to keep in his personal files. 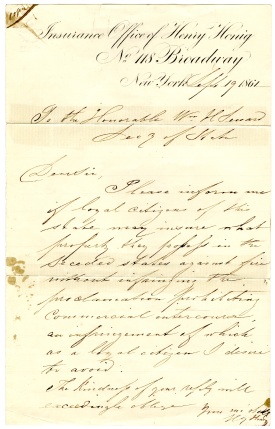 Copy
Insurance Office of Henry Henig
No. 118 Broadway
New York Sept 19 1861
To the Honorable Wm H. Seward
Secy of State
Dear Sir,
Please inform me if loyal citizens of this state may insure what property they posses in the seceded states against fire without infringing the proclamation prohibiting commercial intercourse as infringement of which as a loyal citizen I desire to avoid.
The kindness of your reply will exceedingly oblige.
Your mo’ obed
Hy Henig

The second letter is a reply from Secretary State William H. Seward. Received in Washington D.C. from New York, his letter is dated just two days later on September 21, 1861. 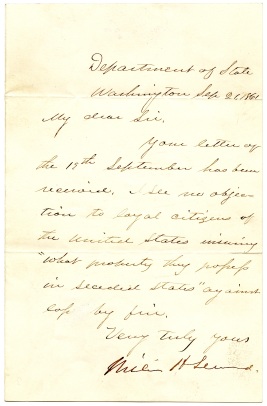 My dear Sir,
Your letter of the 19th September has been received. I see no objection to loyal citizens of the United States insuring “what property they posses in seceded states” against any loss by fire.
Very truly yours
William H. Seward